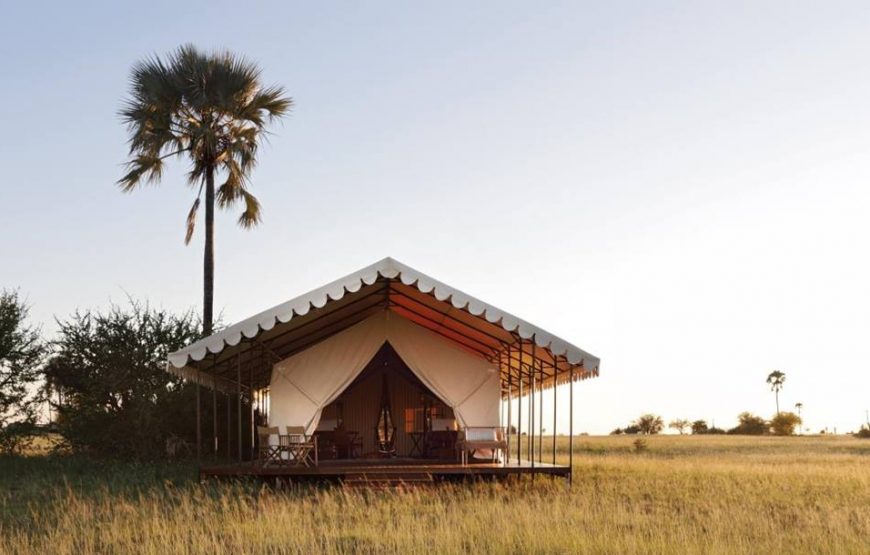 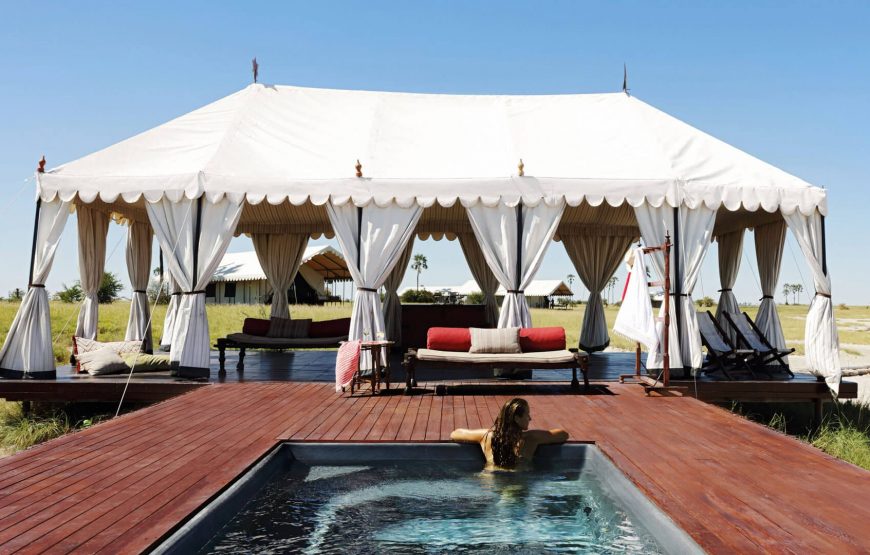 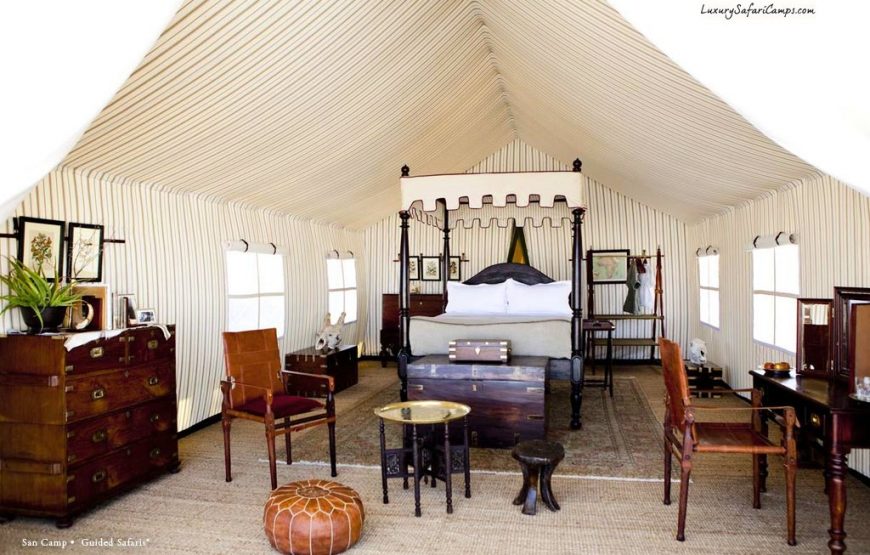 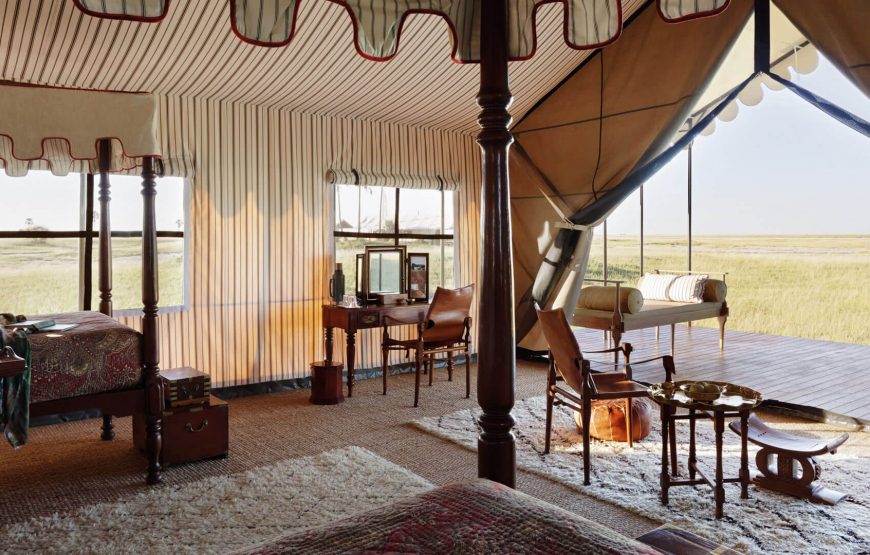 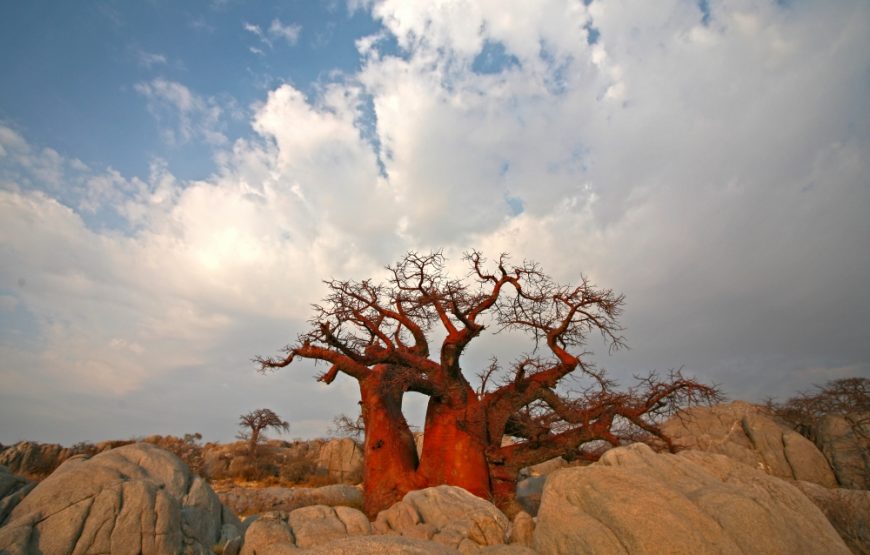 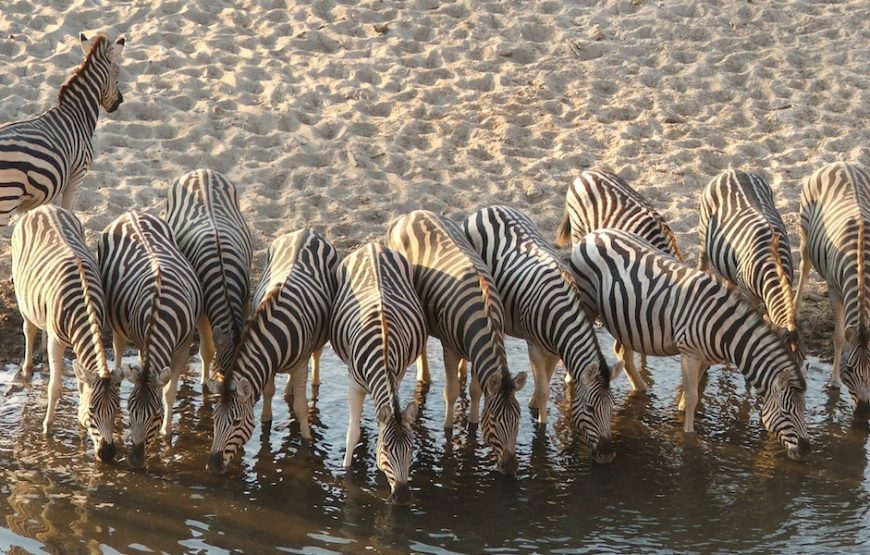 This is a semi-luxury tented safari perfect for those wishing to visit the best wilderness areas in Botswana in a mobile camping safari style. Starting in Maun and ending in Kasane. This Exceptional Wildlife Luxury Vacation In Botswana starts from the Maun then to the Makgadikgadi – Lekhubu Island, Moremi Game Reserve and Chobe National park. The Okavango Delta is home to some of the world’s most remarkable and endangered mammals. Savuti area is known for predators; lion, leopard and cheetah. The Chobe National park is one of the top destination with one of the largest concentrations of wildlife on the continent spread across a vast area of nearly 12 000 square kilometres.

Touch down at Maun airport from Johannesburg and be welcomed by our representatives and make your way to your lodge. Depending on when you arrive you may have time to visit the town shopping mall and mingle with the locals and have time on the internet to inform your relatives you left behind about your arrival to Botswana.
MAUN was founded in 1915 to be the capital of the Batawana people, it has had a reputation as a hard-living Wild West town helping the local cattle ranching and safari operations. The name Maun is derived from the San word ‘maung’ which translates as ‘the place of short reeds’
Meals: Welcome Dinner
Accommodation: Jump street Chalets One of the most popular destinations on the Makgadikgadi is Kubu or Lekhubu Island, a rocky outcrop near the south-western shore of Sowa pan. This crescent-shaped island is about one kilometer long, and its slopes are littered with fossil beaches of rounded pebbles, an indication of the prehistoric lake’s former water levels.
Many rocks on the island are covered in fossilized guano, from the water birds that once perched here. Fantastically shaped baobabs perch on the island, and they are surrounded by the white salt surface of the pan, making for a unique otherworldly atmosphere.
Apart from the eerie isolation of this remote area - and its awesome beauty, Kubu is rich in archaeological and historical remains that chronicle both early human inhabitation and more recent history. Stone age tools and arrowheads can still be found today along the shorelines of this tiny island and a circular stone wall and stone cairns suggest that Kubu may have been part of the outer reaches of the great Zimbabwe empire that was centered at Masvingo in modern-day Zimbabwe. We will explore this area for two days.
Meals: B, L & D
Accommodation: Bush Camp Site On day 4, we start off with an early morning Game Drive around the Makgadikgadi and later drive out to Maun again. We check-in at one of the lodges in Maun. Take note we cannot go to our next destination without spending a night in Maun to restock our supplies and also road networks connect from Maun to different national Parks.
Meals: B, L & D
Accommodation: Jump street Chalets From Maun, we will drive through to Moremi Game Reserve, one of the best wilderness areas of Botswana which covers swamp and dry areas. This gem of a National Park has garnered a number of important distinctions. In 2008, it was voted the ‘best game reserve in Africa’ by the prestigious African Travel and Tourism Association at South Africa’s premier tourism fair, Indaba.
It is the first reserve in Africa that was established by local residents. Concerned about the rapid depletion of wildlife in their ancestral lands – due to uncontrolled hunting and cattle encroachment – the Batawana people of Ngamiland, under the leadership of the deceased Chief Moremi III’s wife, Mrs. Moremi, took the bold initiative to proclaim Moremi a game reserve in 1963.
It is the only officially protected area of the Okavango Delta, and as such holds tremendous scientific, environmental, and conservation importance. And, undoubtedly, Moremi ranks as one of the most beautiful reserves in Africa, possibly in the world.
Moremi Game Reserve is situated in the central and eastern areas of the Okavango and includes the Moremi Tongue and chief’s island, boasting one of the richest and most diverse ecosystems on the continent. This makes for spectacular game viewing and bird watching, including all major, naturally occurring herbivore and carnivore species in the region, and over 400 species of birds, many migratory and some endangered. Both Black and White Rhino have recently been re-introduced, now making the reserve a ‘Big Five’ destination.
Contained within an area of approximately 3900 sq km, here land and Delta meet to create an exceedingly picturesque preserve of floodplains – either seasonally or perennially wet, waterways, lagoons, pools, pans, grasslands and riparian, riverine, and mopane forests.
This terrain makes driving Moremi’s many loops and trails both delightful and, at times, totally inspiring. The next two days will be spent searching for the wide variety of wildlife and birds that this area is renowned for while absorbing the sounds and beauty of this region. Game drives in the early morning as the sun rises and in the late afternoon as the sun sets will be the norm. We will be conducting our game drives along some of the channels of the Okavango delta and we also have an option of doing a boat cruise or mokoro excursion in the Okavango delta. We will explore this area for two days.
Meals: B, L & D
Accommodation: Private Designated Camp Site On day 8 we head south away from the Okavango Delta, further into the heart of the Chobe National Park, home of the largest concentration of African elephants. Established in 1968 and covers approximately 11 700 sq km. The Chobe River forms its northern boundary. The four distinct areas of Chobe National Park are (1) Chobe riverfront, (2) Ngwezumba pans, (3) Savuti, and (4) Linyanti. Savuti is well known for its predators such as lions, leopards, cheetah, and even African wild dogs. On day 8 you will Channel the Chobe River on a boat cruise.
Meals: B, L & D
Accommodation: Private Designated Camp Site Transfer to Kasane for your flight to Johannesburg 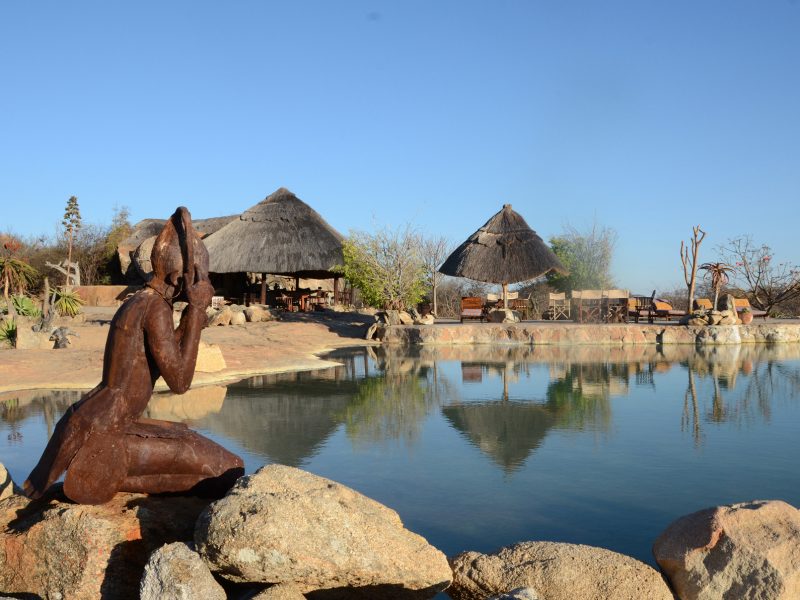 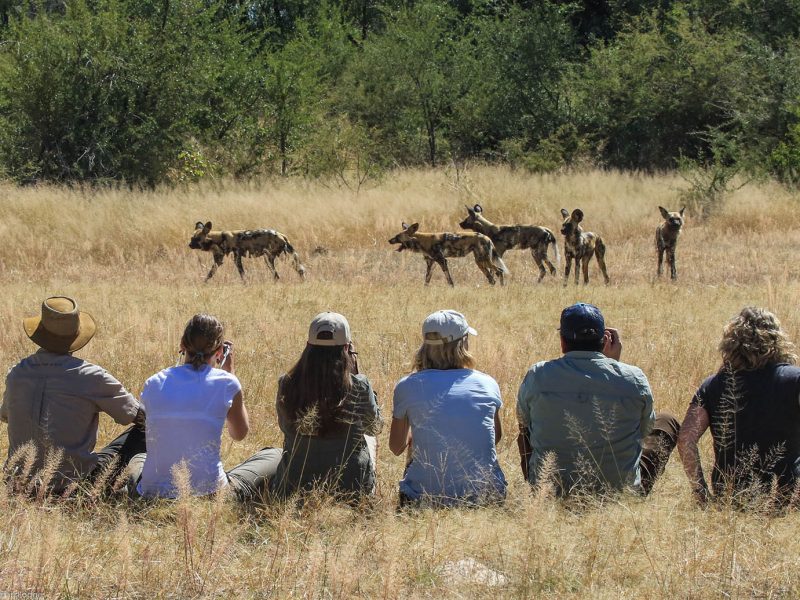 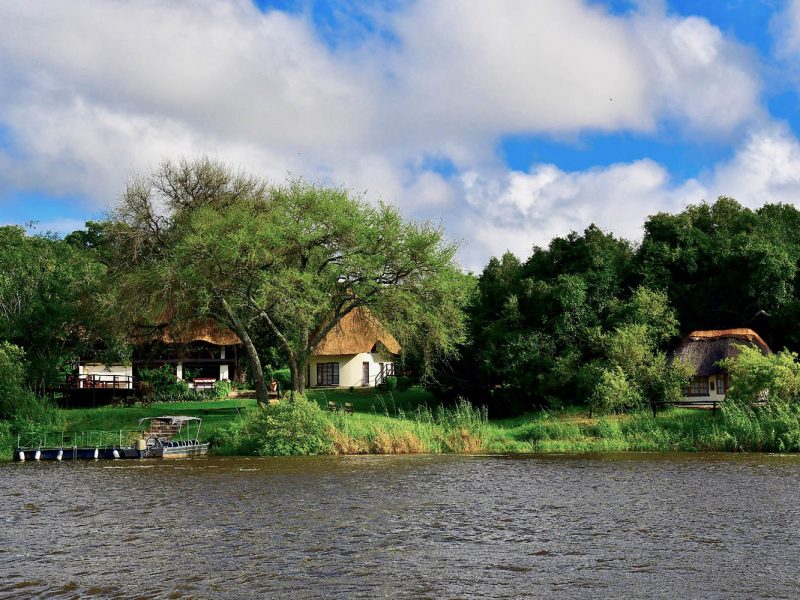 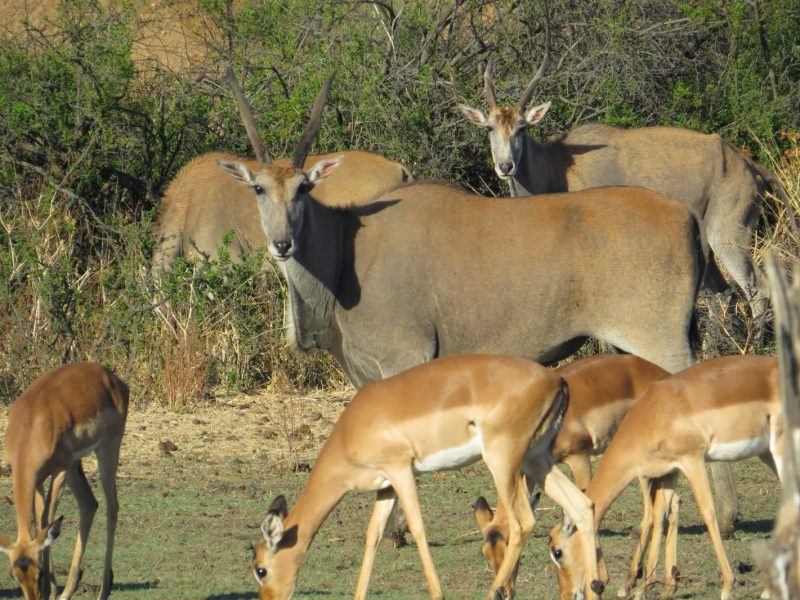